Former United States Senator Olympia J. Snowe (R-ME) served in the U.S. Senate from 1995-2013 and as a member of the U.S. House of Representatives from 1979-1995. She is currently a member of the Board of Directors of T. Rowe Price Group, Inc., serving on the Executive Compensation and Nominating and Corporate Governance Committees; a member of the Board of Directors of Aetna, Inc.; a Senior Fellow at the Bipartisan Policy Center in Washington, D.C., a 501(C)(3) organization, where she is a member of the board and co-chairs its Commission on Political Reform; and Chairman and CEO of Olympia Snowe, LLC, through which she provides communications and policy advice. Olympia also serves on the Board of Directors of the Commission on Presidential Debates, the Senior Advisory Committee of Harvard University’s Institute of Politics, the National Institute for Civil Discourse’s Board of Advisors, the Board of Trustees of the International Crisis Group, the National Governors Association’s Health Advisory Board, the John F. Kennedy Profile in Courage Award Committee, the Advisory Board of the Peterson Center on Healthcare, the Warren B. Rudman Center’s Board of Advisors, and the National Advisory Committee for The Shriver Report.

Senator Snowe was elected as a Republican to the 96th and to the seven succeeding Congresses from 1979 to 1995. She was then elected to the United States Senate in 1994, and re-elected twice in 2000 and 2006. She is known for her strong sense of bipartisanship, and was recognized by Time magazine as one of “America’s Best Senators in 2006.” Senator Snowe served on the Subcommittee on Health Care and was chair of the Committee on Small Business and Entrepreneurship.

Senator Snowe received her bachelor’s degree in political science from the University of Maine. 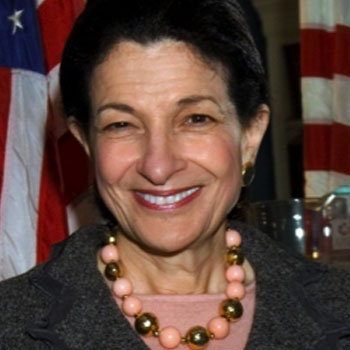